The Toilet Timer by Katamco

It all started the day Adam Stephey had stayed on the toilet so long that he couldn’t get up—all feeling in his legs was gone. He used the sink to pull himself up and held on until he could walk. When he left the bathroom, there were the kids, strewn about the hallway waiting to get in. Adam can become mesmerized by his smartphone and lose all track of time while he’s in the bathroom. He’s not unusual. If it’s not the smartphone, then it’s a book or a puzzle. And then there is the toilet singer, who, just like the shower singer, uses the small room and the hard surfaces, the reverberations and echoes, to exercise those vocal chords—to his or her own delight. And, if the selection of the day is Hallelujah, all 80 verses of it, well, it’s a problem.

Adam knew that the world needed something to let people know when toilet time is up—a Toilet Timer. Like an hour glass but a “five-minute glass.” He and his wife Katie, a marketing guru, founded their company Katamco, LLC. Adam had been “tinkering” since his first set of LEGOs. When he was older, his grandfather taught him how to built furniture. Even now, his hobby is marquetry. He and his friend, Elliot Worth, had created a side business, 1 Up Card, for the gamers who long for the good old days. 1 Up Card cleans the consoles and games for systems such as Nintendo and Atari. So Adam and Elliot got working. They made up a bunch of prototypes, 60 or 70, for the Toilet Timer. With Christmas coming, Elliot took some of them into work and they were a massive hit! With that kind of encouragement, it was time to test the market on Kickstarter. Another success. They raised $23,000 for a goal of $20,000. They didn’t have much trouble getting the timer into production. From their “real” jobs in the gun storage industry, they had many connections, from the mold maker to the manufacturer to the precise type of sand.

There are three Toilet Timers, one of them with a female figure, as well as a “Get Off the Pot” greeting card and a picture and poetry book written by Adam. Also available is a “Holiday Gift Bundle” that includes all three items.

The Toilet Timer has gotten a lot of attention: The Serious Side of the Toilet Timer

Yes, there is one. The Toilet Timer can help potty train a child with autism when the usual methods are ineffective. Autistic children find comfort in routine. They are not interested in being grown up like Mommy and Daddy nor in being more independent. They are perfectly fine with the familiarity of a diaper. A “transition object” helps. It might be a toy or a book; it might be the Toilet Timer that is only used during bathroom time. It adds predictability as they adapt to a new routine, and the picture makes it clear to the child what it is for. You can use the timer to show the child it is time to go to the bathroom, or the child can pick it up to let you know when she needs to go. It also helps when the child can see how much longer he needs to sit there. “A few more minutes” or “a bit longer” means nothing to the child. Seeing the sand sift through is easier to understand. Adam and Katie Stephey, a husband-and-wife duo from Normal, Illinois, appeared on Friday's episode of ABC's "Shark Tank" with a pitch the Sharks thought was a joke — but the co-founders ended up with a six-figure investment from Mark Cuban.

"Introducing our most successful product to date, the Toilet Timer," Adam told the Sharks. "This is a sand timer that I invented. It gives you about five minutes to do your business, so you don't miss anything important."

Adam thought to create the Toilet Timer after he realized he was spending too much time in the bathroom, he said. "It's primarily a gag gift."

All five investors were skeptical – "Oh hell no," Cuban said at first, and Barbara Corcoran added, "You can't be serious."

But, after Adam revealed the product's sales, the Sharks were intrigued.

"What has happened over the past two Christmases is Amazon's algorithms have picked up that people like this and they buy it, so last Christmas, I didn't spend a dime on advertising," Adam said, adding that in December 2019, the timer generated $250,000 in sales alone.

"I used to poo-poo these kind of tchotchke ideas until I got into Potato Parcel," a company which sells potatoes with handwritten messages on them, Kevin O'Leary said. "Now, I'm not laughing anymore, because I get a big check every month."

Despite this, most of the Sharks were not sold.

"You're thinking this is a business. It ain't. It's a gimmick. You can make a certain amount of sales, and it's going to burn out," Corcoran said and opted out of a deal. Along with her, O'Leary, Lori Greiner and Daymond John also opted out.

However, Cuban remained interested, saying he "always dreamed" of adding a Toilet Timer to his portfolio.

"What a surprise ending," Corcoran said. 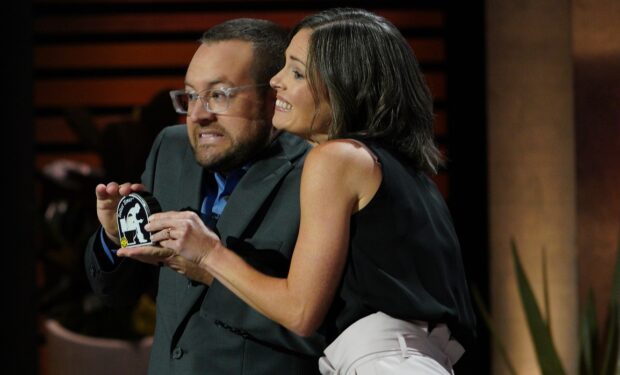 On Season 12 of Shark Tank, husband and wife team Adam Stephey and Katie Stephey of Katamco pitch their gag gift Toilet Timer. It’s a 5-minute sand timer designed for “poo-crastinators” who are accused of wasting too much time in the bathroom.

They went into the Tank seeking an investment of $200,000 in exchange for ten percent equity.

They had the good fortune of pitching in front of billionaire Mark Cuban who has seen success with his Shark Tankgag gift company Prank-O. They accepted Cuban’s offer: $200,000 for 25 percent.

Since then the product has continually received rave reviews on Amazon, nearly 5,000 of them! And most of them by a big margin are five stars.

How to pass token in postman