Trading gently worn clothing, home décor, and other items, Iowa City’s nonprofit thrift shop, Crowded Closet, has had a home on Gilbert Court for more than 40 years. Now, the store has moved to a new location in Pepperwood Plaza, 851 Highway 6 E.

The store will hold its grand opening at the new location at 10 a.m. March 25.

RELATED: In thrift we trust: thrift culture in Iowa City

Crowded Closet partners with the Mennonite Central Committee, an international organization that provides relief and humanitarian projects throughout the world.

“Over the years, we’ve been able to send millions of dollars to support those relief projects that go on all around the world,” said Christine Maust Beachy, the Crowded Closet volunteer services coordinator.

According to the Mennonite committee’s website, the organization directed more than $65 million to relief, development, and peace projects in 57 countries in 2018.

The new location was formerly a K-Mart, and Miller said the building fit all the criteria the store looked for.

Increased visibility and parking space were two major factors that influenced the decision about the new location, Miller said. The retail space is also about 60 percent bigger than the previous location.

“We knew we had grown to a point where we had grown out of the old location,” Miller said. “Parking was an issue, and people couldn’t find us easily.”

“Now we have the visibility from the highway,” she said. “We have increased street traffic. We are in a retail marketplace.”

Beachy also said the donation area has been improved, with the new location providing easier access and a drive-through donation zone.

Keeping the store in the same general area of Iowa City was another item that was important, Miller said, with the new store less than a mile from its previous location. Miller said the store wanted to remain close to the local service agencies it supports, such as CommUnity and the Shelter House.

“One of the factors that we wanted to do was stay on the South Side,” Miller said. “We work with various helping agencies in the community, and we wanted to make sure that we stayed close to them.”

The vouchers can be used on almost anything in the store, Witry said, including clothing, home goods, and furniture.

“It’s very useful, because obviously, we wouldn’t be able to support a program like that,” Witry said. “If we had to pay for the vouchers, there’s no way that we could provide that service to our clients.”

Crowded Closet is a non-profit thrift shop supporting relief, development and peace projects of Mennonite Central Committee. At Crowded Closet, every purchase is a gift to the world.

30 day return guarantee, with full refund including original shipping costs for up to 30 days after delivery if an item arrives misdescribed or damaged. 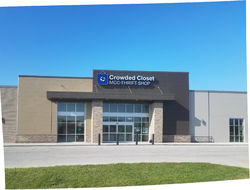 We also have a brick-and-mortar store! Visit us at:

Crowded closets? Time to take a hard look at how they got that way

I was hanging up the laundry in my closet and realized that I had run out of hangers.

I started to go online to order more when I stopped myself and realized that I don’t need more hangers, I need less stuff.

The pandemic has been good for impulse purchases of sweatshirts at attractive discounts.

My dry cleaner starched-shirt savings has been eaten up by hoodie purchases.

But rather than buy more hangers, here is what I am going to do.

First, I am going to go through my closet and decide what I really want to keep.

I won’t be Marie Kondo, asking what brings me joy. Instead, I will be me, deciding what I really want to wear when I am going back to work, rather than Zooming all day.

What are the items that I can literally throw out? OK, not throw out, but donate so that others can have what I no longer need.

Second, I am consciously going to be substituting rather than adding. When something new comes in, something old goes out.

Third, I am going to put things in my shopping cart and pause before I buy.

If I don’t buy, I am going to leave myself with two choices: either put the money I “saved” through not purchasing into our investment account or our charity account.

Shopping online can often create a dopamine thrill that I can match by investing or donating. No, it’s not the same — it’s better. This is addition through subtraction.

Fourth, I am going to pay attention to why I am spending money on things that I arguably may not need.

I have my theories. I feel a bit isolated because I am not having direct contact with my colleagues and clients.

I feel a loss of control because I am following safety protocols that are not of my own design, but that I know are better for my family and others.

I am a bit bored because I know tomorrow is going to look a lot like today and today was pretty similar to yesterday.

And I am frustrated with the political behavior in this country that is partly to blame for people turning on each other rather than toward each other. So I buy another frikkin’ sweatshirt!

I also need an attitude adjustment.

And no, more hangars won’t get me through this.

Ross Levin is the chief executive and founder of Accredited Investors Wealth Management in Edina.

For over 40 years, the Crowded Closet consignment shop has been a staple in our North Shore community and shopping destination for mid to high end women’s designer clothing.

Watch this beautiful little video, made by a volunteer, about the value of shopping/consigning at Crowded Closet:

Please Note: Due to recent CDC and Cook County recommendations, masks must now be worn by everyone in our Shop, regardless of vaccination status. Thanks for your understanding and patience as we work through this time together!

Here are the kind of great items you can expect to find:

We’re constantly adding new items from both YWCA Crowded and YWCA Shop for Good to our website at ywca-shop-for-good.myshopify.com. Find something you like online? You can have it shipped or pick it up curbside.

We have YWCA Crowded Closet gift certificates! Email us at [email protected] or call us at 847-475-1135 with your name, gift certificate details, credit card and billing information. We’ll mail your gift certificate right to your doorstep or schedule a pick-up date at the shop.

We welcome you as a Crowded Closet volunteer!

Crowded Closet is looking for volunteers to assist customers and check out.  If you have a sense of fashion and skills in retail customer service and are looking for a fun and meaningful volunteer activity, please consider interviewing to join our volunteer team. We need you!

EVANSTON, IL — Local consignment boutique The Crowded Closet is under new management and moving down the block next month. After more than 40 years in charge of the Dempster Street shop, owners Cindy Caldwell and Mickie Donohue are retiring and handing over ownership of the shop to YWCA Evanston/North Shore, the nonprofit announced.

"Rather than shutter the boutique, we are thrilled it will continue under the ownership of YWCA Evanston/North Shore," Donohue and Caldwell said in a release. "We fully support this transition and have complete confidence the shop will be in good hands."

Karen Singer, president and CEO of YWCA Evanston/North Shore, said The Crowded Closet is a valuable asset to the community, providing affordable, quality women's clothing. All proceeds from the shop will go to support the group's domestic violence and economic advancement programs to help women and children in northeast Cook County.

Find out what's happening in Evanston with free, real-time updates from Patch.

"We're grateful for the generosity of Mickie Donohue and Cindy Caldwell and we deeply thank them for passing the baton to us for the next chapter of the Crowded Closet," Singer said.

Find out what's happening in Evanston with free, real-time updates from Patch.

In July 2018, the nonprofit announced the acquisition of the resale shop formerly known as Encore & More at 1107 Central Ave. in Wilmette. Singer said the two enterprises would strengthen one another's operations.

"We are honored to have the opportunity to steward Crowded Closet's legacy into the future," said Singer. "We're looking forward to the synergy between the Crowded Closet, a consignment boutique, and the YWCA Shop for Good, a resale shop. We are excited by the possibilities these enterprises offer to support our mission."

The Future is Unwritten

Forty years ago this month, a small group of Mennonite women opened Crowded Closet Thrift Store in Iowa City. What they hoped to achieve is reflected in the motto on the sign at the Gilbert Court store: “A world of difference.”

Proceeds from Crowded Closet go to public service organizations, including Mennonite Central Committee (MCC), which sponsors relief and development programs around the world. Since opening in 1978, Crowded Closet has raised $8 million for the organizations it supports.

The store was modeled on a Mennonite-run thrift store founded years earlier in Canada, according to Carey Miller, executive director of Crowded Closet. Instead of collecting clothes to be sent to those in need, a group of four Canadian women decided it would be more effective to collect and sell clothes and other items, then donate the money instead.

“And that’s what happened here in 1978,” Miller said. “They decided to give a shot, hoping to make a small difference. But they ended up making a big difference.”

Crowded Closet strives to make a difference locally as well, by supporting other nonprofits in Iowa City.

“We have a strong partnership with the Crisis Center of Johnson County, the Domestic Violence Intervention Program and Shelter House,” Miller said. “And when other helping agencies have needs, we try to work with them, too.”

To celebrate 40 years in business, Crowded Closet is hosting a five-day celebration with different sales each day.

Monday: 40 percent off on clothing

Tuesday: 40 percent off on housewares

Wednesday: 40 percent off on vintage clothing.

Thursday: 50 percent off items (“The third Thursday of the month is always 50 percent off, and we didn’t cut it down to 40 percent just to fit in with the rest of the week,” Miller explained.)

Friday: 25 percent off in the gift shop. (The gift shop is the only part of Crowded Closet in which the inventory isn’t donated. All the items are purchased by the store on a fair-trade basis.)

Those with ’70s fashion-sense can get an even bigger discount on vintage clothing, if they are willing to strut down the catwalk. There will be 1978-themed fashion show at 1 p.m. on Wednesday. Anyone who wants to participate should purchase their vintage clothes by noon that day, and let the staff know they are ready for their fashion model moment. The vintage clothes purchased for the fashion show will be 75 percent off.

Crowded Closet has changed over the past four decades, going for a small, all-volunteer effort to having five full-time staffers with 250 volunteers. Another big change will be coming early next year, when the store moves to space in the former Kmart at 851 Highway 6 East. The thrift store has been at its 1213 Gilbert Court location since 1997, and Miller said they are looking forward to having more space after the move.

“Currently we have two facilities — the actual shop and a storage building across the street, where are recyclables are processed,” he explained. “Once we move, we’ll have everything under the same roof for the first time.”

Thoughts? Tips? A cute picture of a dog? Share them with LV » [email protected]